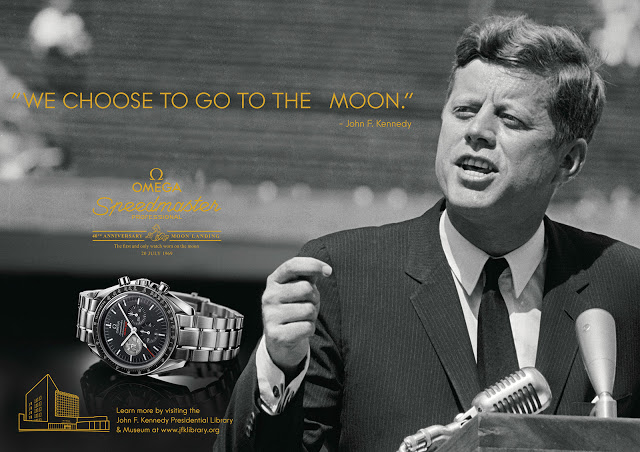 A photograph of the late President John Fitzgerald Kennedy is featured in a new worldwide Omega campaign for its Speedmaster chronograph watches.

The Swiss brand, part of the Swatch Group, said the connection between the Speedmaster and Kennedy was a natural one. It was during his 1,000 days in office that the US’s first manned space flights took place. On the final two missions, Wally Schirra and Gordon Cooper wore Omega Speedmasters on their spaceflights.

Before Cooper’s launch on 15 May 1963, the Speedmaster became the only watch ever to be approved by NASA for use on all of its manned flights, according to the firm. The chronograph has been part of every NASA manned mission since, including the six lunar landings.

In the advertisement, the Speedmaster chronograph is described as “the first and only watch worn on the Moon”.

President Kennedy was instrumental in promoting America’s lunar landing programme. On 25 May 1961, in an address to Congress, he first mentioned the importance of going to the Moon, saying: “I believe that this nation should commit itself to achieving the goal, before this decade is out, of landing a man on the Moon and returning him back safely to the earth.”

More than eight years after he first voiced the challenge, Apollo 11 landed on the Moon and at 2:56 GMT on 21 July 1969, Neil Armstrong stepped onto the lunar surface. The US historian Arthur Schlesinger said of the mission: “The 20th century will be remembered, when all else is forgotten, as the century when man burst his terrestrial bonds.”

“And,” as Omega President Stephen Urquhart noted, “he did it wearing a Speedmaster.”

Omega said the use of Kennedy’s image was arranged in co-operation with the John F. Kennedy Library Foundation which administers the rights to the late President’s name and image