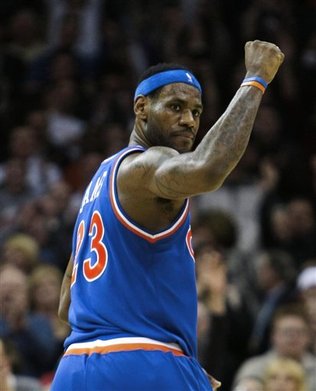 CLEVELAND – LeBron James is now shooting with a Golden Arch. The NBA superstar has agreed to a multiyear partnership with McDonald’s Corp., adding the global fast-food giant to a list of heavyweight corporate sponsors that already included Nike, Coca-Cola and State Farm. Financial terms were not immediately known, but the deal certainly will add to James’ substantial net worth. Last year, Forbes Magazine estimated the 25-year-old made more than $40 million in salary and endorsements. He is currently ranked behind only Tiger Woods on the Bloomberg BusinessWeek list of America’s most powerful athletes.

James will support several McDonald’s programs and promotions as well as Ronald McDonald House Charities, which provides housing to the families of seriously ill children. He has filmed his first commercial with McDonald’s, a take-off on the infamous 1993 ad that featured hoops legends Michael Jordan and Larry Bird engaging in a trick-shot competition for a Big Mac. The new spot will debut during the Super Bowlon Feb. 7. James, a six-time All-Star with the Cleveland Cavaliers and reigning league MVP, is thrilled with his newest business partner. “McDonald’s and I make a great team,” he said. “We share many of the same core values, including a commitment to excellence and giving back to the community. I am also excited about the opportunity to work with Ronald McDonald House Charities, which helps improve the lives of so many children and their families around the world.” Beyond his involvement in charity work with the company, James will be part of TV, print and online advertising campaigns for McDonald’s, which operates more than 31,000 restaurants in 119 countries.

Maverick Carter, James’ business partner and CEO of LRMR Marketing, called the pairing of James and McDonald’s a “a perfect fit.” “McDonald’s is one of the best known and most recognizable brands in the world,” Carter said. “LeBron couldn’t ask for a better partner and for him to be involved with such a company says a lot about where he is in his career.” Carter said James had “on-and-off” talks with McDonald’s over the past four years, and that the sides began finalizing their deal in recent months. James, who has two young boys, fits McDonald’s wholesome image and his worldwide popularity makes him an ideal ambassador for the company. “We really like what LeBron stands for on and off the court,” said Peter Sterling, vice president of marketing of McDonald’s USA. “He shares the same values as McDonald’s. He’s hard working. He’s community minded and charity driven. LeBron is also that rare athlete that transcends his sport.” When Woods admitted to infidelity, the public firestorm led to some of his corporate sponsors either dropping the world’s top golfer or re-examining their relationship with him. Woods’ indiscretions may have prompted companies to take a closer look at potential clients. McDonald’s had no concerns in signing James.

“It’s a fair question,” Sterling said. “We’ve had a long-term relationship with LeBron, going back to when he was in high school. What we can do is rely on LeBron’s past actions and if his past actions are any indication, we’re very excited about our future.” In March, James will lend his support to the McDonald’s All-American high school games in Columbus, Ohio. Proceeds from the event will go to Ronald McDonald House charities in central Ohio. James was named MVP of the game when it was held in Cleveland in 2003. James filmed his commercial for McDonald’s earlier this month in Indianapolis. The spot also features Orlando All-Star center Dwight Howard and Bird, the Boston Celtics legend. Howard recently signed a three-year deal with McDonald’s worth a reported $3 million per year. Filmed at Conseco Fieldhouse, the commercial is a spin on the famous “The Showdown” ad that Bird made with Michael Jordan. In that commercial, which first aired during the 1993 Super Bowl, the Hall of Famers engaged in a game of H-O-R-S-E with the winner getting a Big Mac. Bird and Jordan traded imaginary trick shots — the final one off a skyscraper’s roof top — which had to be sunk with “nothin’ but net.” James has made previous Super Bowl ads for Bubblicious and State Farm. Carter said Steve Stoute, founder of New York-based Translation Advertising, played a key role in bringing together McDonald’s and James.