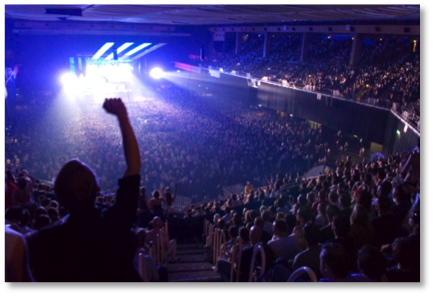 An Insight from Michael MacRitchie

From the first lullaby sung to us as  babies, music provides the “soundtrack” of our lives.  So much so that I think many of us take it for granted — just as we do the soundtrack of a film, which we often hear without listening to it. That is, we enjoy the film without realizing how much the music conditions our reaction.

Music penetrates almost every part of our lives: our rest, our entertainment, our education, and if you are religious- your prayer.

Throughout history, it has celebrated the triumphs and tragedies of life. As Plato said, music “gives soul to the universe, wings to the mind, flight to the imagination”.

Music both shapes and reflects society. Dancers follow its beat; protesters use it to find their voice. It can promote ideals — like peace and solidarity — but it can also prepare armies for battle (or even a game of Rugby)  It is part of almost every important personal and collective moment. But it is also mysterious. Rhythm and pitch can be expressed as mathematical formula; and musicians know the techniques by which they produce a certain sound. But no scientist or musician can explain the power that music has over our emotions. That, surely, is what another Greek writer had in mind, who said that song is a divine gift from God.

In a world of diversity where often values clash, music leaps across language barriers and unites people of quite different cultural backgrounds. And so, through music, all peoples can come together to make the world a more harmonious place… Ahhhhh (pleasant sigh I hear?)

We are reminded that “Music can make us do good things. From Concert for Bangladesh to Live Aid and MTV Staying Alive to War Child we know that music has been used as a powerful communication and fund raising tool to raise social awareness and money for cause for many years.”

And in the words of another…

“Moments like Live 8 remains a brilliant moment but what is more important is the brilliant movement of which it was a part. This gives the poorest of the poor real political muscle for the first time. It is this movement of church people and trade unionists, soccer moms and student activists, that will carry the spirit of Live 8 on. It is this movement, not rock stars, that will make it untenable in the future to break promises to the most vulnerable people on this planet. That was always why we put on the concerts.”