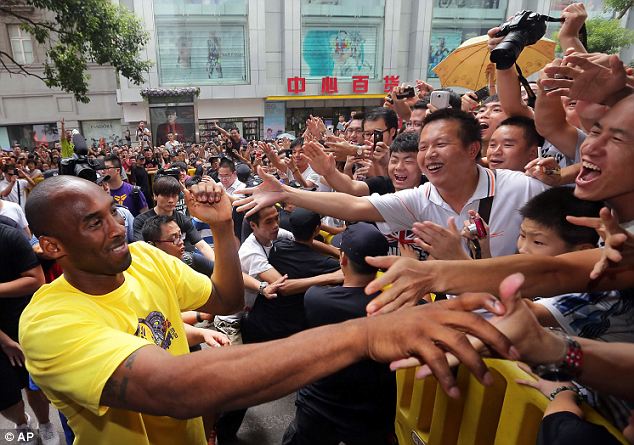 I picked this article up from business 2 community where Michael Smith refers to the growing trend of Western Celebrities joining Chinese social media platforms. The article can be found here or just below if you keep reading.

China. One of the last remaining major frontiers of social media. And there are legitimate reasons for that. Not only is there an obvious language barrier, but Facebook and Twitter usage is restricted too, thus forcing users outside of China to use Chinese social networks to engage with consumers and fans within the country. And companies and celebrities alike have been doing exactly that.

The past few weeks have been filled with buzz of western celebrities joining Chinese social media platforms. The most recent celebrity was the normally antisocial Lakers star player Kobe Bryant. Bryant joined Sina Weibo in February and though he hasn’t posted a single thing up until this date (17.Feb.) he already collected over 500 thousand followers within just 3 days.

However, Kobe Bryant is by far not among the first. Celebrities started using Sina Weibo back in 2011. Tom Cruise was among the early adapters of the new platform, with one of his initial posts being: “Hello! We have some questions about adding a background and posting etiquette. Is this where we should ask? Thank you!” You can imagine that the Chinese fans didn’t take long to react. Thousands of fans offered their help instantly. Today everyone from Justin Bieber to Bill Gates is engaging with their Chinese fan base and consumers posting status updates as trivial as “Just finished my birthday dinner. “Now on way to my party at Peek Tahoe.”
Paris Hilton.

At first glance, it seems that celebrities are applying the same approach on Weibo as they are on Twitter, targeting their Chinese audience beyond the great Twitter and Facebook firewall. But Sina Weibo isn’t the only platform western celebrities are actively engaging in.

2012 gave rise to China’s number 1 instant messaging platform named WeChat and it is likely to continue throughout 2013. WeChat, which is owned by Tencent, took the country by storm and has grown to over 300 million users in just as little as 9 months. Though some call it the Whatsapp of the East, it is much more than that. With features such as voice and video chat, users are able to engage instantly with their individual contacts or groups in real time or with pre-recorded material, thus providing more intimate interactions vs. simple text messaging. It isn’t hard to imagine that actors and music artists found a liking for the newest major player in the Chinese social media world. As mentioned in a blog post by TechInAsia Hollywood celebrities such as John Cusack, Selena Gomez and Maggie Q are already part of this community.

Another feature that sets WeChat apart is the ability to scan QR codes by using the app. Such visual codes are highly popular among Chinese smartphone users.

For example, blogs that have a WeChat QR code enable the reader to scan and add that blog to the list of things to follow on the app. The same applies to any other page that has a WeChat QR code. So for those who want to follow their favorite celebrity, all they have to do is scan the QR code and they get instant access to their posts and add them to their list of people to follow.

Care to see what the Backstreet Boys are up to?

What celebrities are doing, companies and their brands have been doing too. Starbucks, Coca Cola etc. are already actively engaging with their fans on major Chinese platforms. With a combined number of over 700 million users on Sina Weibo and WeChat alone, it is no wonder why. Are you part of the conversation?