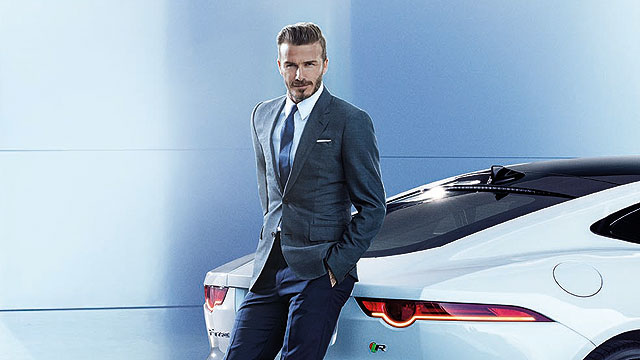 Beckham will appear in TV and print ads exclusively in China; he’ll initially be promoting the Jaguar F-Type Coupe but will later support the XJ – a key car for the Chinese market.

Jaguar says his role “will develop and will see him feature in many Jaguar brand and product communication campaigns in the coming years”.

Top fashion photographer and filmmaker Peter Lindbergh has shot the first Beckham Jaguar ad campaign, which will first be seen on Chinese billboards and in magazines. There will be a TV ad campaign later this year: neither promotions will extend beyond the Chinese market, stressed Jaguar.

Bob Grace, Jaguar Land Rover China MD, said: “We are absolutely thrilled that David will be an ambassador for Jaguar in China.

“David Beckham is a Briton whose achievements mean he has global popularity and he is someone who embodies contemporary British style and sophistication. He is a truly modern, British individual with a genuine passion for design, innovation, performance and driving.”

Beckham assured us that “I’ve always been an admirer of Jaguar – from the styling and design to the feel and roar of the engine, every element feels uniquely British.

“I love the classic E-Type of the 60s and today this legacy is alive in the phenomenal F-Type Coupe, a car that epitomizes British craftsmanship.”