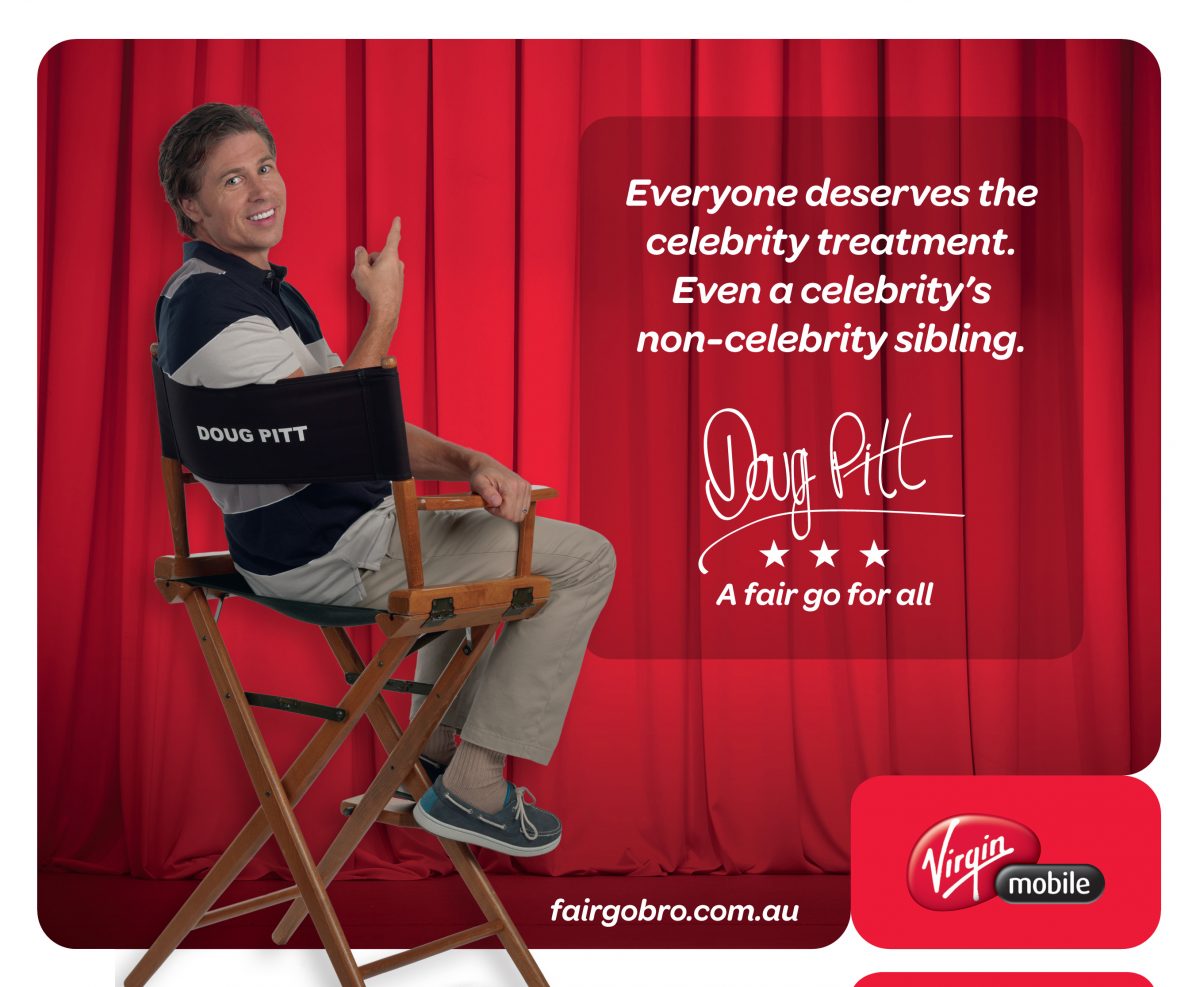 Celebrity endorsements are not a new idea. Brands have been using this for years to set themselves apart from their competition. Big name celebrities have been able to demand crazy money to endorse products across the globe.

Virgin Mobile, a challenger brand in the Australian market, stumbled across an interesting insight. The offspring of celebrities often live an innocuous and mostly forgotten life.

So why not take the sibling of one of the biggest names in the world, and offer him his first ever endorsement?

This idea is at the heart of what the brand stands for: A fair go for all.

Doug Pitt is a pretty simple guy. He is the proud owner of an award winning IT company that has been in existence for over 20 years. But he does much more than that with his time. He also s raises large sums of money for and awareness of, issues facing the people of Tanzania. His efforts have helped raise the standards of clean water, agriculture and education in the poor West African nation.

Despite all his efforts, he has never been the face of a big brand. His brother on the other hand commands millions of dollars to put his name, and face to brands all around the globe.

Virgin Mobile took advantage of the opportunity to give the brother of one of the worlds biggest celebrities a fair go, and gave him his first celebrity endorsement.

Whilst most of the connections between Doug and Virgin Mobile are pretty loose, such as Brad getting lots of free things, and Doug getting free voicemail, there is a clear tongue in cheek look at the way endorsements work and the link between the celebrity and the brand. Doug rolls

The campaign sets out to raise the overall profile of Doug. Referred to as his Cele-Bro-ty status. This has achieved done by asking the people of Australia to get behind Doug and offer him some ‘like’.  A social media activation where people ‘like’ the brands Facebook page to follow the adventures of Doug. As his followers increase, so does his status,.

Virgin Mobile have managed to build their social media presence, and most importantly, the number of people they can communicate retail offers to, off the back of this initiative. They now sport over 24,000 fans.

As the campaign has evolved, the involvement of Doug Pitt has increased. Using tradition channels such as TV, outdoor and radio, Virgin Mobile has taken their fair go message to the people of Australia. But it has been via digital and social media that they have made the most impact.

The success of the campaign is not overly apparent. What is clear however is that they have taken a traditional marketing technique and applied a Virgin touch to it, standing out from the otherwise homogenised Australian telco category.

I am a big fan of this campaign and like the way Virgin have created “a fair go for Brad’s Bro.”